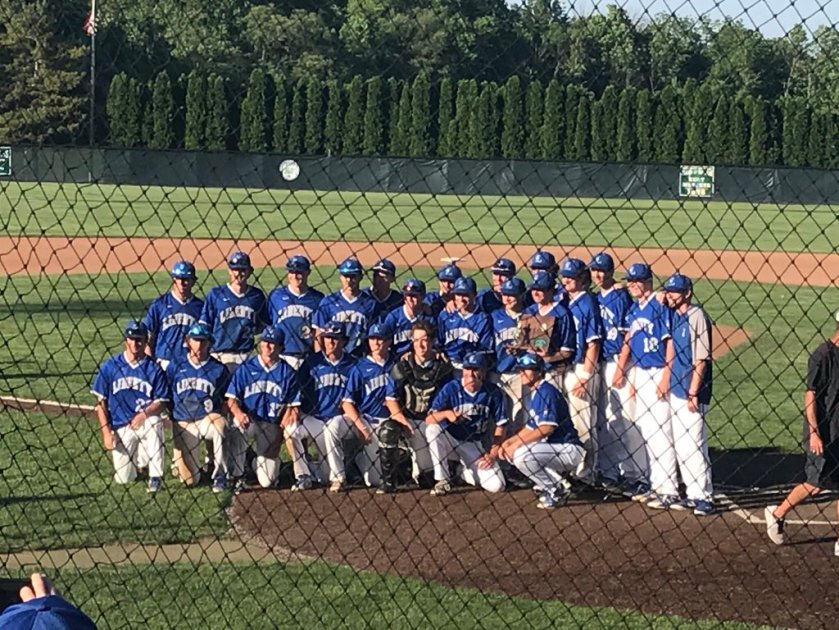 The one team remaining from Central Ohio.

Liberty never trailed on the afternoon, as the Patriots’ bats were active from the opening pitch. While some stellar defense from New Albany second basemen Jimmy Stevens saved a pair of runs in the opening two innings, Liberty would not be denied.

The Patriots struck first in the bottom of the third, as regional semifinal hero Mitch Okuley scored on a sacrifice fly from the bat of Brennan Rowe. A team that has refused to quit all season long, New Albany responded in the ensuing half inning.

Working with two outs, New Albany manufactured its only run of the game by way of two singles, an error and a walk, as Nathan Blair crossed home plate to tie Friday’s regional final at a run apiece.

That tie was short lived, however.

Responding with six runnings over the next two innings, Liberty broke the game open with four hits in that span, as a few costly errors added to New Albany’s struggles.

By the time the sixth inning rolled around, Liberty held a commanding 7-1 lead.

An offense that had produced just four runs in the previous two games, New Albany found itself in what seemed to be an insurmountable hole. Going down in order in the top of the sixth, the final nail was put in the Eagles’ coffin, as Liberty tacked on another insurance run in bottom half, rolling to an 8-1 victory.

Running the table in the district and regional tournament, Liberty did what most expected of them coming into the postseason. A deep squad with top notch pitching, hitting and defense, Liberty put down a young, but promising New Albany team with a performance that was strong all across the board.

Eight of its nine hitters had a hit on Friday, as Liberty received a healthy dose of offense. The Patriots had six combined hits from its 2, 3 and 4 hitters in Carson Comer, Rowe and Corbin Parrish. Utilizing sacrifice bunts, delayed steals, infield singles and a few extra base hits, Liberty put on a hitting clinic in the win.

The Patriots even received a big-time pitching performance from Jack Metzger, who went the distance, allowing just one run on four hits, while striking out five New Albany batters.

With the win, Liberty is the only team remaining from the Central District across all four divisions. The Patriots and Columbus Academy, who fell to Coldwater in the Division III regional final at Elida, were the only teams remaining coming into the day.

Liberty will play Medina Highland on Friday, June 1 at 10 a.m. at Huntington Park in Columbus. While Liberty won in impressive fashion on Friday, Highland was no slouch themselves. Battling back from a 6-0 fifth inning deficit, Highland took down Massillon Jackson 8-7 in extra innings, coming back from a 6-2 deficit in the seventh inning alone.

Liberty is looking to win its first state baseball title in school history next weekend in its first-ever trip to the state tournament. The Patriots have a chance to become the first school in its district to play for a state title since Olentangy in 2006, while Olentangy Orange fell short in the semifinals a year ago.

With a star-studded roster full of big-time talent, Liberty will take the next step toward its ultimate goal on Friday morning.

Next weekend’s state tournament in Division I will also be a little unusual, as no private schools advanced in regional action. Aside from Liberty and Highland, Anthony Wayne and Mason also punched their tickets to Columbus on Friday.